Auto-braking systems have undergone a series of changes. After the invention of cars, it was not easy for people to bring them to a halt. The first cars applied simple braking systems that were not reliable. For instance, they relied on a simple lever system made of wood that moved against the wheels whenever the driver wanted to bring a moving car to a stand. This type of braking system worked only when the vehicle was moving at a speed of between 10mph to 20mph and where there was sparse traffic (Kinkaid, O’Reilly & Papadopoulos, 2003).

In 1890s, when Michelin brothers made the pneumatic rubber tires, the old wood braking structure was rendered useless since the system of woods used to destroy the rubber badly, and this generated the requirement for a substitute braking system. In the year 1898, one of the inventors from Cleveland made an electric car that had front-wheel disc brakes. This braking system comprised a caliper that had braking pads and a disc that resembled modern bicycle brakes. One of the biggest challenges of this braking system is that since they were made of a copper brake lines that moved against a hard metal disk, they produced a loud screeching noise that could affect people in the car and those around it (Kinkaid, O’Reilly & Papadopoulos, 2003).

The Structure and Components of an Automobile Braking System 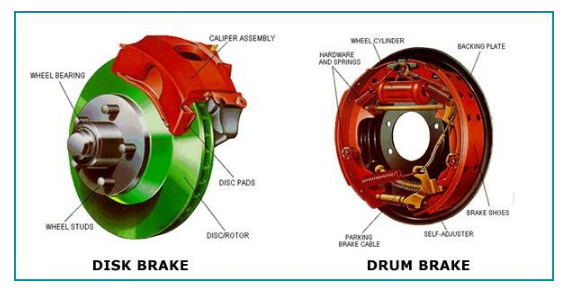 The disc braking systems contain the caliper assembly, disc pads, wheel bearings, and a disc or a rotor, and the hardware that is used to mount the braking structure on the vehicle. The caliper of the disc braking system is fixed to the master cylinder by using hoses, tubes, and the valves that transfer the brake fluid (Breuer & Bill, 2008). On the other hand, the drum braking system is made of a backing plate, brake shoes, a drum, an axle, and or hub assembly, wheel bearings, the wheel cylinder, and the hardware which is used in fixing it to the vehicle. To improve its performance, the wheel cylinder of the braking system is fixed to the master cylinder using hoses, tubes, valves that transmit the brake fluid to the rest of the braking system. Some of the drum braking systems have double leading shoes with each of them having its hydraulic cylinder, while the others have one trailing and one leading shoe fixed with a pivot at its front. This design enables the two shoes to be separated from each other by a cylinder at its end. Although this system is simple, it is less powerful.

In the automobile braking system, the brake fluid transfers force by using pressure from where it is applied through the hydraulic channels to the rest of the braking mechanisms that are located near the wheels. Since the braking system generates a lot of heat, the brake fluid that is used should have a high boiling point for it to be effective. This braking system only works when the vehicle is under operation. In addition, the braking system is designed in a way to avoid corrosion, but the corrosion inhibitors used in this system depletes with time. One of the problems with this system is the excessive moisture produced when it is in operation (Kinkaid, O’Reilly & Papadopoulos, 2003). Research is being carried out with the aim of identifying the vaporization point that may affect the safety and the efficiency of the automobile braking system.

The Work of the Braking System

When the driver depresses the pedal, the pressure generated on the brake pedal is transmitted to the piston found in the master cylinder. This, in turn, forces the brake fluid to move from the master cylinder via the brake lines and the hoses to the wheel cylinders and the calipers. The force that is applied to the pedal of the vehicle generates an equivalent force on each of the vehicle’s piston. Wheel cylinders and calipers have pistons that are either fixed to the brake shoe or the disc brake. Each output from every piston pushes the friction solid that is fixed to the wall of the brake drum of the rotor, and this stroke slows down the rotation of each wheel. When the pressure applied to the pedal is released, the shoes and the pads return to their original positions (Breuer & Bill, 2008). This forces the brake fluid to be transmitted back to the master cylinder via the flexible tubing and the hose.

Map Your Success Out!
Attract high grades like a magnet! Time to get on the right side of your professor.

Advancements Made to the Automobile Braking Systems

The automobile industry is working towards the production of integrated braking systems that are not only able to slow down a vehicle but a braking system that can be used for other functions such as capturing the energy and stabilizing it. The automotive braking system is among the most important parts of car systems. The evolution of the braking system is aimed at improving the overall efficiency and safety of the users (Chabot, 2015). One of the challenges that researcher run across in the development process is that it is difficult to separate technologies that have practical applications from those that do not have any practical operations.

The other improvement that engineers are working on in the automotive braking system is torque vectoring. This will provide a differential ability to vary the torque power that is delivered to each wheel. In its turn, it will provide improved road handling and grip irrespective of whether the driver is decelerating or accelerating. The system of power transfer has already become common in all-wheel-drive vehicles, all-electric vehicles and it is also used in the electric hybrid vehicles (Chabot, 2015). The invention of torque vectoring necessitates the introduction of an electric monitoring system, in addition to normal mechanical components.

The automobile braking system is also expected to be improved so that it will have faster activation times. The introduction of a responsive torque vectoring and the elimination of the caliper drag have brought about the need for quick-activating parts. For instance, some motor production companies such as the Continental AG have invented new types of brake boosters, which have the ability to offer a short activation time (Chabot, 2015). This is one of the solid improvements that has been achieved due to previous developments used in the automobile braking systems.

Another change that is being implemented towards improving the work of braking systems is the introduction of the regenerative braking system. It is important due to the increased electrification of vehicles. Electric vehicles have enabled the introduction of regenerative braking system that entirely relies on the electric motor-generator (Chabot, 2015). Due to the migration from the kinetic energy recovery system that was relied on in formula one, one of the main concerns that has been raised in regard to this advancement is that it will require the invention of perfect software which will lower its safety.

Adaptive cruise control system is another important advancement that has been invented with the aim of improving the operation of the automatic braking systems. This type of braking systems keeps an automatic distance between the cars. It makes driving much easier especially in stop-start driving situations. This system can allow the driver to pre-set the speed range within which the system works (Meyer, 2015). This invention is based on the cruise control system, but it has a radar sensor that has been set to about 200 meters with a beam angle of about 12 degrees. The automatic braking system can detect that the traffic ahead is slowing down and it will adjust its speed to match the speed of the vehicles ahead. This automatic braking system will warn the driver when driving too close to the car that is in front. The automatic braking system does this through sound signals and visuals, which are followed by a short braking jolt, and in extreme cases, it brings the car to a halt. It is achieved by using the front assist system that alerts the brakes whenever it senses the likelihood of a collision.

Although there are benefits that the introduction of the new technologies will have in the automobile industry, there are still several hurdles that have slowed down the introduction of these braking systems (Kinkaid, O’Reilly & Papadopoulos, 2003). One of these challenges includes the risk that the technologies have not been fully tested in regard to their safety and reliability when used in different conditions and driving styles.
Another challenge that has slowed down the process of implementing the new inventions in the automobile braking system is the high costs that are required in the process of developing and testing this invention. The new technology needs thorough vetting which also requires time and money. Also, after the inventions are perfected new costs will be required to build new lines for the production of new braking system.

Economies of scale is another factor that has hindered the production, development, and implementation of the invented braking systems. For instance, a small organization Vienna Engineering Company invented and patented a cam-disc braking structure. But the challenge is that this company is small to the Tier One suppliers since it does not have the initial capital and the needed influence for driving its electrochemical invention to the market. This challenge can be solved by using an automaker, merging or partnering with a larger company.

Driving Factors for the Change of Braking Systems

Another driving factor for the change of the automobile braking systems is the need to meet emission reduction targets. This has affected the decision about the fuel efficient inventions and systems that allow energy recuperation during braking. Companies are also working on methods to reduce residual drag which allows brakes to function with the start-stop function. Reducing residue drag is important because a reduction by 0.5Nm has a potential of saving up to about 0.1 liters of fuel used for every 100 km traveled (Meyer, 2015). The aim of all automakers is to produce, a lighter, smaller, faster, and more durable braking system. The braking systems that are to be generated need to be affordable.

Place your first order get a 15% DISCOUNT

with the code "premium15"

The need for having an automatic emergency braking system is another driving factor. Companies are working hard towards building sensitive braking systems that can recognize an object and the required stopping time. They also try to develop a system which will bring to a stop a vehicle within a given period. This is important because the brake’s response speed will determine the amount of time available for the installed sensors to analyze the emergency situation. The current braking systems are quick, but they are not quick enough to decelerate big vehicles within the required time to prevent an accident. The current braking system requires optimization of several components starting from the braking control unit, the calipers, to the fluid dynamic of the system (Meyer, 2015). The inventions that have been made may achieve a faster pressure-apply by using conventional electronic stability control.

Also, the new technologies require both time and money for their implementation. In spite of all these challenges, it is expected that this invention will be implemented and automobile brakes will range from the automatic emergency brakes to electric brakes with an auto hold.

worrying about deadlines or grades. Have a question? Chat with us!

* You deserve a special treatment because you are special! *