The history of the usage of satellites for the maritime communications goes back to 1979 when International Maritime Satellite Organization (Inmarsat) was founded on demand of the International Maritime Organization (IMO). This organization became a part of the Global Maritime Distress and Safety System (GMDSS) to improve the quality and reliability of search and rescue of the ships in distress. Since then, satellite communication systems have developed. Now, they are widely used onboard of navy ships and cargo vessels not only for the safety purposes but also for the business and private communication, phone calls, and the internet.

All vessels systems use either geostationary or orbiting satellites for communications. Geostationary satellites are located at the geostationary orbit at 35,786 kilometers (22,236 mi) above the equator. In this position, satellites have an orbital period that equals the Earth’s period of rotation. Therefore, such satellites do not move if observed from the Earth’s surface, and they can be used for communication. The limitation is the coverage area or the footprint of each satellite, which is defined by the frequencies used for communication. The satellites are powered by the solar energy and they act as the transmitting and receiving stations. The satellites’ relay data stream between the stations located on the Earth’s surface, either land or sea. The coverage, or ‘footprint’, is a part of the surface where an antenna of the land station can obtain a view of the satellite. Inmarsat satellites have four coverage areas. These areas are called ocean regions and they are designated as the Pacific Ocean Region (POR), the Indian Ocean Region (IOR), the Atlantic Ocean East Region (AOR East), the Atlantic Ocean West Region (AOR West) (Australian Maritime College, 2015).

In addition, the bandwidth of connection is limited by the frequency band as it is shown in table 1.

Three major components are required for the marine satellite communication to work, the land station, the mobile station onboard, and the satellite. Satellite signals are weak. Therefore, parabolic dishes are used to concentrate the signal on the sensor and then amplify it in the Low Noise Block (LNB). Different amplifying devices are used for C-band and Ku-band. While C-band amplifiers use bipolar transistors, Ku-band LNBs have gallium arsenide field-effect transistors (GaAsFET), which allows the usage of smaller dishes due to exceptional sensitivity and low noise on the high frequencies used in satellite communications. 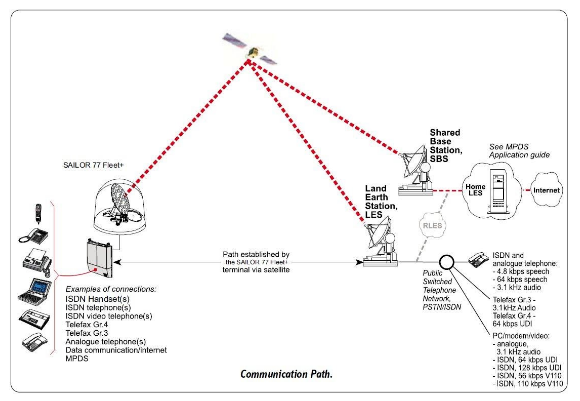 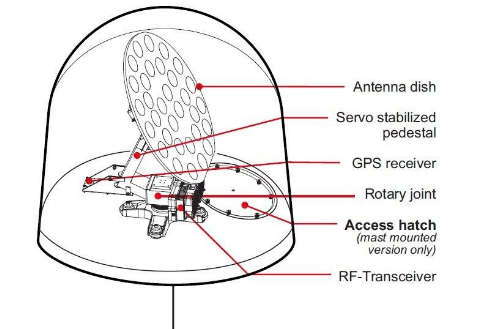 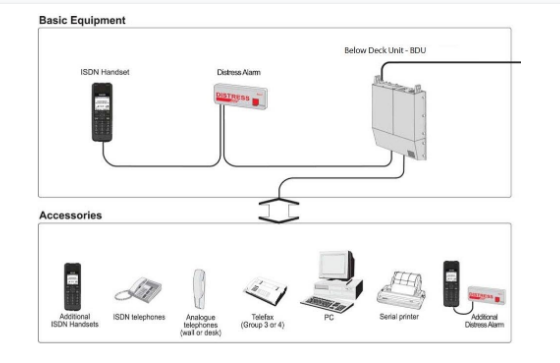 Based on the principle of work, satellite communication domes should be placed in such a way to minimize blind sectors, considering the antenna beam width +/- 7.5°. It is not always feasible due to multiple possible obstructions depending on type and the age of the vessel. Optimal position should be selected during the installation of the equipment.

From the ETO’s point of view, the essential part of any equipment is the possibility and difficulty in finding faults. Most of the modern equipment does not expect it, so it prohibits the disassembly of components (Thrane & Thrane, 2007a, p. 4). All repairs onboard consist of finding and replacing the faulty components. The list of spare parts is available from the manufacturers, and usually, the kit of the most important and demanded parts is supplied with the equipment (Installation manual, 2007, pp.52-53). Although general knowledge of system operation is required, most manufacturers provide a troubleshooting guide to help with the faultfinding of complex equipment (Thrane & Thrane, 2007b, pp. 88-92).

Common faults of satellite equipment are power failures caused by various reasons, from a blown fuse to a damaged cable on the way to the unit. A defective PSU may cause power issues as well. Another fault is a weak or lost signal, which, in many cases, happens due to the obstruction on the way of the beam. If obstruction is the reason, the only fix is the change of the vessel’s heading to restore signal. However, some types and brands of equipment require the gyrocompass signal to maintain correct azimuth. The presence of heading data from the gyrocompass should be checked and rectified. Other reasons of the lost signal are the wrong settings for the desired satellite, the damaged cable between the dome and equipment inside, or the vessel being out of the footprint of the satellite used even just a day ago.

Another group of faults is those caused by the natural wear of moving components such as driving belts and gear for the dish positioning and faults that happen due to equipment overheating. Larger dome installations used for operations and private communication usually have a built-in or external air conditioning unit. The malfunction of this unit may lead to the faults or damage of communication equipment in the dome. Physical damage of equipment inside dome may happen at sea in extreme weather conditions.

How They are Used

Satellite communication systems are used onboard the vessels for the safety related communication as well as broadband operation and private communication, voice calls, and the internet. While Inmarsat C and Fleet 77 are for now the only systems that comply with GMDSS (Global Maritime Distress and Safety System) requirements for satellites, the maritime VSAT (Very Small Aperture Terminal) systems show the growth of data rates in some segments from 10 to 100 Mbps within six years’ period from 2007 to 2013. The increasing demand is caused by different reasons. Cargo shipping companies adopted VSAT to retain their crews. Cruise ships increase bandwidth to satisfy the connectivity demand of their passengers. In addition, in oil business, the VSAT use increases to improve operational intelligence (“The coming wave”, n.d.).

Older generations of satellite communication systems were dependent on other onboard equipment such as GPS and gyrocompasses to maintain the correct positioning. Modern systems have GPS receivers built-in but they still have interfaces for the connection to the vessel’s positioning devices. This provides greater flexibility and reliability to the satellite system. However, there is one serious drawback for satellite communications. Systems, using geostationary satellites, cannot operate in polar areas with latitude above 80°. For the vessels operating in such areas, the only reliable substitution for emergency communications will be short or medium wave radio. The same is true for the case of loss and non-repairable malfunction of a satellite system. Therefore, radio communication equipment is installed according to GMDSS requirements and it should be tested on regular basis.

Satellite systems play an increasingly important role in the maritime communication, both safety and operations related. Despite that, short and medium wave radio communication devices must be present onboard and be operational in case of the malfunction of satellite systems. Troubleshooting is not difficult for the majority of cases. However, satellite systems do not contain components repairable onboard; hence, a sufficient amount of spare parts must be available onboard, especially for the ocean-going vessels.

* You deserve a special treatment because you are special! *